Ten’s of thousands of white residents flee the city in the 1960s and ‘70s lured by attractive federal mortgage subsidies, tract housing, green spaces, and new highways. In a generation the racial make-up of the school district flips from two-thirds white to over two-thirds black. Thinly veiled racist redistricting and banking practices push black families to increasingly smaller and more segregated neighborhoods. Over the next few decades the economic and industrial base of the city collapses and the school system fails along with it. A city leader decries that, “Our city was set up to fail.” The city is Newark, New Jersey. But it could just as well be Rochester, New York.

Jeff Linn is the chairman of the department of educational administration at the College at Brockport and a member of the GS4A steering committee.

in that city’s schools. The book is impeccably researched and reads like the thriller it is.

The characters include the photogenic then mayor of Newark and current U.S. Sen. Cory Booker, New Jersey Gov. Chris Christie, billionaire Facebook founder Mark Zukerberg, and a secondary cast that even includes two former Rochester City School District Superintendents, Oprah Winfrey, and other politicians and philanthropists who saw Newark as ground zero for re-shaping urban education in America. The author’s writing illuminates the local, state, and national politics that shape urban education in the 21st century. However this is not a tale of good vs. evil. Her even-handed reporting neither spares nor vilifies any one group.

Central to the story are philanthropists who advocate a “paternalistic” business type model for the Newark schools. They bring in consultants at $1,000 per day (indeed in the final tally, consultants eat up almost one-quarter of the $100 million) and expand charter schools to help poor people—without engaging the community in their design. At the same time, they mock their critics for “using poverty as an excuse.” 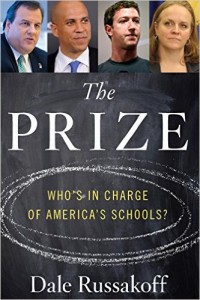 of other leaders—including former RCSD superintendent Jean Claude Brizard—to replace another former Rochester superintendent, Clifford Janey. Anderson attempts to push through what Zukerman, Booker and Christie call a “transformational teacher contract.” Newark becomes, in the words of the author, “a political sausage factory” as both the community and union stymie her.

Remarkably, the district squanders the promise and slowly runs out of money as the charters and unions dig in their heels and refuse to work together, a battle captured in a quote later in the book by a community member: “We had the opportunity to get Zukerberg’s money. Otherwise it would go to the charter schools. I decided I shouldn’t feed and clothe the enemy.” The title of the book, The Prize, turns out to be the money.

Russakoff tells the reader that Newark is a metaphor for much of urban America and the intractability of both sides—the market oriented charters vs. the bureaucratic public schools. Still there are heroes in the book. Most are the teachers in both the public and charter schools (I know charters are public schools but in the 21st century they have often become quasi-public entities supported by foundations and philanthropists) and the parents who want nothing more than for their kids to have a shot at the same education as their while suburban counterparts. And in a moment of clarity in the book, even Governor Christie acknowledges that he would not be governor if he attended the Newark schools.

The author avoids the trap of making this a book for policy wonks by giving voice to teachers, principals, social workers, kids, parents and community members as they struggle to make sense of it all. These voices give the book a heart and remind the reader of the hard work that any educator and family faces when confronted with the realties of poverty on a daily basis.

In the end a school reformer voices a lesson he learned from Newark. “It’s not even what you do sometimes. It’s the way you treat people and the process of doing it. If your approach is to get a lot of smart people in the room and figure out what these people need and implement it, the first issue is who decided that you were smart.”

Humble words—humbling book. Worth reading by all who care.