That was then, more than a generation ago, with significant concerns being raised about the effects of “bright flight” among both white and non-white students and the declining middle class enrollment in Rochester city schools. This is now, and now is so much worse, with time running out to turn things around in our community.

“Then” was 1979. I recently reconnected with a Center for Governmental Research report published that year, Race and Education in Rochester, written in conjunction with a broad-based Citizens’ Advisory Committee concerned about the emptying out of city schools.

The focus of that report was on racial diversity and integration, with no reference to socio-economic diversity and the effects of the concentration of poverty, which frames so much of today’s discussions about urban education. Nonetheless, the parallels and connections between the issues raised in that report and the realities of now are unmistakable.

Meanwhile, child poverty rates in the city have doubled during these years, and State Education Department reports indicate that 90 percent of all RCSD students now are classified as economically disadvantaged/low-income.

In the 1979 report, concerns were raised about increasing racial segregation and isolation in our city schools: At one end of the spectrum, the student population in 13 of 58 schools at that time was at least 80 percent minority, including 10 schools that were 90 percent or more minority; while at the other end, 14 schools had at least 75 percent white enrollment, including two exceeding 90 percent. The minority populations in the other 31 schools ranged between 26 percent and 76 percent. In retrospect, compared to 2015, the district in 1979 was relatively integrated. Today, all but five city schools have minority populations of at least 80 percent. Socioeconomically, only three city schools today student populations that are less than  80 percent poor, and even in those three “best” schools, around 2/3 of the students live in poverty. 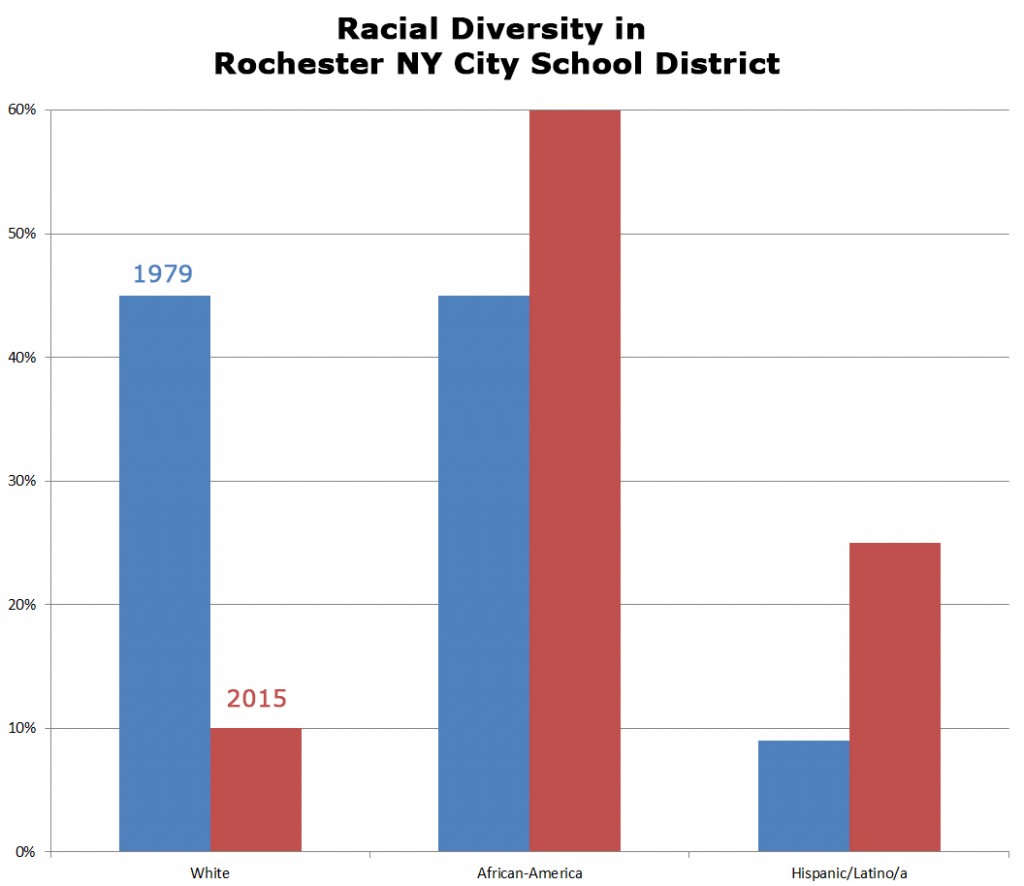 Why does this matter? Because national research demonstrates clearly that once concentrations of poverty in schools get much higher than 40 percent of enrollment, overall achievement levels decline.

And every single one of our city schools now significantly exceeds that 40 percent mark! This doesn’t mean that individual students can’t succeed in such settings (we all know of dramatic success stories in spite of such concentrations), but the percentage of successful students will be much lower in high-poverty schools than in lower-poverty schools. And this is important, not just for the poorest students, but also for the more affluent, because socioeconomic integration leads to cross-cultural learning and diversity better prepares students for the work force of the future.

The 1979 report held out hope for decreased segregation of city schools, and offered some viable approaches that could have worked then within the city. But it is no longer possible to cap the number of low-income students in city schools at 40 percent without partnerships with other districts. The 1979 report referenced the desirability of considering strong special-focus magnet schools that could draw students from both city and suburbs, and noted that “the problems are not just the [City] School District’s to solve,” and that the segregation and growing concentrations of poverty demand that the larger community beyond the city borders must be “also responsible for part of the solutions.”

If that was true more than a generation ago, with far less concentrated poverty than today, how much more true is it today? The future of another generation of students, and the future well-being of our community, are at stake.

(The 1979 CGR report referenced here is not available online. If you would like to see a copy, email Don Pryor at dpryor@cgr.org)